“The re-inoculation we initiated in the first quarter of this fiscal year continued to restrict supply in the second quarter, which in turn significantly reduced our net sales and gross profit margin.  In addition to a 13.7% decrease in sales volume, the lower production levels resulted in a $0.6 million increase in costs for the current quarter, and reduced gross margin by 9.3 points.

“We have returned to mostly normal production levels for spirulina, and as a result, the re-inoculation should not continue to have significant negative impacts on our financial results in future quarters. Demand for spirulina remains high, and at September 30 we had a large number of open spirulina orders for both Nutrex Hawaii products and Cyanotech bulk material.

“Astaxanthin sales for the quarter were 0.2% higher than last year, and at the end of the quarter we had orders of $0.8 million that were still in transit to customers, compared to $0.1 million in transit at September 30, 2017.  These orders will be recognized as revenue upon delivery in October 2018 and fall into our third quarter results,

“Sales to Costco were up 2% and sales to Amazon were up 35% in the second quarter compared to the second quarter of fiscal 2018, reflecting continued growth with these key customers.  We continued to invest in these relationships, for example, by joining Amazon as a premium sponsor during the Kona World Championship Ironman Race.

“Net sales decreased 16.4% for the first six months of fiscal 2019 compared to the same period last year, driven by lower spirulina sales (down 36.8%) due to the re-inoculation of our spirulina ponds and the related fall in production.  Astaxanthin sales were down 3.4% compared to the first six months of last year due to a higher volume of shipments in transit at the end of the current quarter that will be recognized as revenue in October.

“The lower spirulina production levels reduced gross margin by 9.9 points for the first six months of the current year.  An additional 2.8 percentage point decrease in gross profit margin resulted from a higher astaxanthin cost per kilo compared to the same period last year, due to lower production as a result of the reduced light levels that occurred during the recent Kilauea eruption.”

— Cyanotech will host a Skype broadcast at 8 p.m. EDT on Tuesday, November 13 to respond to questions about its operating results and other topics of interest.  Interested parties are asked to submit questions to [email protected] before 12 p.m. EDT on Tuesday November 13. The Company will respond only to relevant questions relating to the Company’s second quarter fiscal 2019 financial performance, and will not be accepting any questions or comments during the broadcast.

To join the broadcast, please browse http://cyanotech.com/meet approximately five minutes prior to the start time.

About Cyanotech — Cyanotech Corporation, a world leader in microalgae technology for over 30 years, produces BioAstin® Hawaiian Astaxanthin® and Hawaiian Spirulina Pacifica®. These all natural, dietary ingredients and supplements leverage our experience and reputation for quality, building nutritional brands which promote health and well-being. The Company’s mission is to fulfill the promise of whole health through Hawaiian microalgae. Cyanotech’s BioAstin® offers superior antioxidant activity which supports skin, eye and joint health, as well as recovery from exercise*. Cyanotech’s Spirulina products offer nutrition that supports cardiovascular health and immunity.*  All Cyanotech products are produced from microalgae grown at our 90-acre facility in Kona, Hawaii using patented and proprietary technology and are Generally Recognized as Safe (GRAS) for use in food products. Cyanotech sells its products direct to consumers at retail locations in the United States and online at www.nutrex-hawaii.com and also distributes to dietary supplement, nutraceutical and cosmeceutical manufacturers and marketers. The Company is regulated by the FDA. Visit www.cyanotech.com for more information.

*These statements have not been evaluated by the Food and Drug Administration. This product is not intended to diagnose, treat, cure or prevent any disease.

“Safe Harbor” Statement under the U.S. Private Securities Litigation Reform Act of 1995 Besides statements of present fact and historical fact, this press release may contain forward-looking statements.  Forward-looking statements relate to the future and are subject to inherent uncertainties, risks and changes in circumstances that are difficult to predict. Our actual results may differ materially from those contemplated by forward-looking statements.  We caution against relying on forward-looking statements. Important factors that could change actual, future results include: changes in sales levels to our largest customers, weather patterns in Hawaii, production problems, risks associated with new products, foreign exchange fluctuations, and availability of financing, as well as national and global political, economic, business, competitive, market and regulatory conditions.  Other factors are more fully detailed in the Company’s annual Form 10-K filings with the Securities and Exchange Commission.

Financial Tables Follow: The following tables do not contain footnotes or other information contained in the Company’s Form 10-Q for the period ended September 30, 2018, which can be found on the Cyanotech website (www.cyanotech.com) under Investors>Investor Filings upon filing. As such the following Financial Tables are provided only as a guide and other factors are more fully detailed in the Company’s annual Form 10-K filings with the Securities and Exchange Commission. 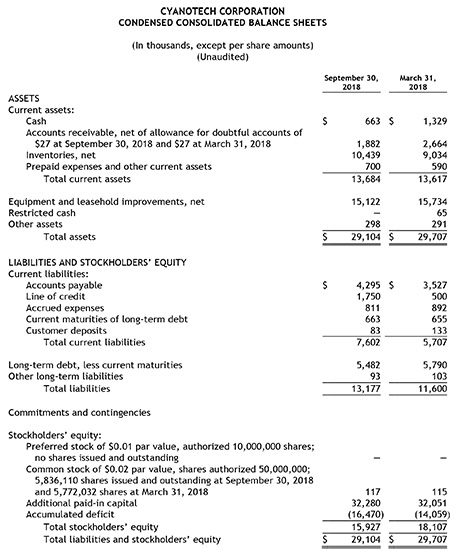